Plug Power (NASDAQ: PLUG) has grown its revenue impressively in the last few years. Yet it is still nowhere near profitability. Thats a mixed signal, which makes it hard to decide where the company is headed. Given the way it is progressing, Plug Power may take quite a few years before it becomes profitable. For a growing company, that isnt necessarily a concern.

Lets take a longer view -- a decade and beyond -- and try to find if Plug Power stock can help you retire a millionaire.

Hydrogen as a fuel

The use of hydrogen as a fuel is increasingly gaining traction. Many countries are actively promoting hydrogen. As an example, South Korea is targeting 81,000 fuel cell electric vehicles (FCEVs) in use by 2022 and hopes to increase this number to 2.9 million by 2040. In 2019, countries participating in the Second Hydrogen Energy Ministerial Meeting in Japan set a goal of putting 10 million FCEVs on roads by 2030. 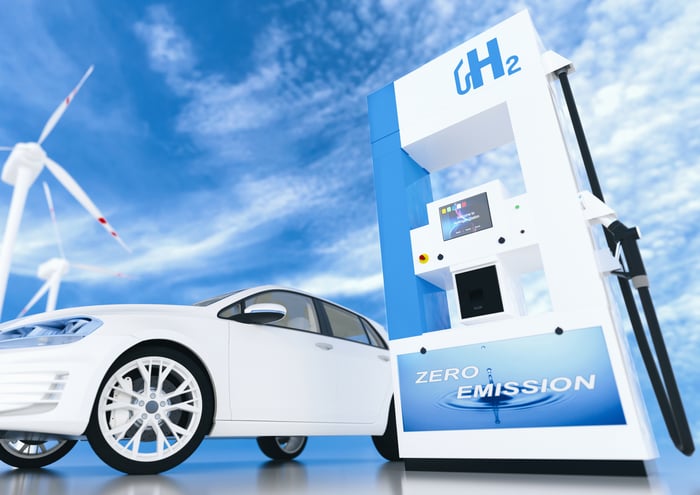 However, the actual progress on this front so far has not been very encouraging. In 2020, only around 10,000 new FCEVs came on the roads globally, taking the total number of FCEVs in use to a mere 35,000. Notably, the number of vehicles added in 2020 was lower compared to around 12,350 new FCEVs that were added to the global stock in 2019. Countries will need to do a lot more if they want to meet their collective targets in hydrogen use.

Several factors are limiting, and may potentially limit, the adoption of hydrogen as a fuel. With the growth in battery-powered vehicles, the incentive to develop hydrogen refueling infrastructure is diminishing. Again, the absence of supporting infrastructure, in turn, further restricts the growth of FCEVs. This infrastructure will likely need governmental support and incentives to develop. Right now, growth of battery-powered vehicles has clearly outpaced that of FCEVs, at least in the light vehicles segment. There were roughly 6.7 million battery electric vehicles in use globally at the end of 2020. Hydrogens combustible nature, as well as challenges relating to its storage and transport, are among the factors liming its growth as a transport fuel.

Yet hydrogen can be useful in heavy-duty vehicles, stationary power generation, industrial use, aviation, and marine applications. In short, there are significant growth avenues for hydrogen fuel despite its limited adoption in light-duty vehicles.

The problem with Plug Power

Plug Power reported revenue of $124.6 million in the second quarter. Thats more than 30 times its quarterly revenue 10 years ago. Importantly, its revenue growth has accelerated in the last few years. In Q2, the companys revenue grew 83% year over year. Though it looks impressive, the concern is that Plug Power isnt growing its profits in line with the revenue growth. On the contrary, its losses continue to widen, and it continues to burn cash at increasingly higher rates. 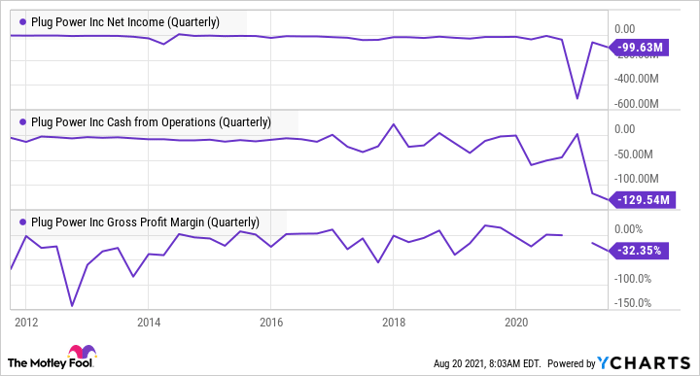 Plug Powers second-quarter loss stood at $99.6 million, compared to a loss of $9.4 million in the second quarter of 2020. With no profits so far in its history of over two decades, Plug Power has relied on shareholders funds for its operations. The company expects to generate gross margin of more than 30% by 2024.

It would take at least some more years beyond 2024 for Plug Power to generate net profits. Moreover, the company has failed to deliver on its plans quite a few times in the past. As things stand today in terms of Plugs widening losses, I am skeptical about it meeting its 2024 gross margin guidance.

A tough road ahead

So far, Plug Power has been selling fuel cells largely for use in forklifts. The companys inability to do so profitably even after so many years likely indicate that the buyers are not willing to pay more for fuel cells than alternative options available to them. Plug Power hasnt suggested any concrete plans as to how its fuel cells can be sold profitably in the materials handling market.

At the same time, the company is investing to expand into newer segments, including transport, aviation, and marine. However, it would be several more years before it becomes clear if Plug Power is profitable in these new markets.

All in all, Im skeptical about this stock right now. To me, it does not look like Plug Power stock could help you retire a millionaire. You might want to look elsewhere for that objective.

10 stocks we like better than Plug Power
When our award-winning analyst team has a stock tip, it can pay to listen. After all, the newsletter they have run for over a decade, Motley Fool Stock Advisor, has tripled the market.*

They just revealed what they believe are the ten best stocks for investors to buy right now... and Plug Power wasnt one of them! Thats right -- they think these 10 stocks are even better buys.

Founded in 1993 in Alexandria, VA., by brothers David and Tom Gardner, The Motley Fool is a multimedia financial-services company dedicated to building the worlds greatest investment community. Reaching millions of people each month through its website, books, newspaper column, radio show, television appearances, and subscription newsletter services, The Motley Fool champions shareholder values and advocates tirelessly for the individual investor. The companys name was taken from Shakespeare, whose wise fools both instructed and amused, and could speak the truth to the king -- without getting their heads lopped off.