The Joint Ministerial Monitoring Committee (JMMC) convened in Baku, the Republic of Azerbaijan, for its thirteenth meeting on 18 March 2019. The Committee reviewed the monthly report prepared by its Joint Technical Committee (JTC) and recent developments in the global oil market, as well as immediate prospects for the remainder of 2019.

The JMMC reiterated the critical role that the “Declaration of Cooperation” has played in supporting oil market stability since December 2016 and took note of the expressed commitment of all participating countries to ensure that such stability continues on a sustainable basis, as overall conformity reached almost 90% for the month of February 2019, which is up from 83% in the month of January.

The Committee recognized the current, critical uncertainties surrounding the global oil market throughout 2019, and stressed on the shared responsibility of all participating countries to restore market stability and prevent the recurrence of any market imbalance.

All participating countries present at the meeting, individually and collectively, assured the Committee that they will exceed their voluntary production adjustments over the coming months.

To this end, the JMMC also urged all participating countries, including those not present at today’s meeting, to achieve full and timely conformity with their voluntary production adjustments under the decisions of the 175th Meeting of the OPEC Conference, 6 December 2018, and the 5th OPEC and non-OPEC Ministerial Meeting, 7 December 2018.

In consideration that market fundamentals are unlikely to materially change in the next two months, the JMMC adopted a recommendation to forego the full Ministerial Meeting in April and instead schedule a JMMC meeting in May ahead of the OPEC Conference meeting on 25 June, during which a decision will be taken on the production target for the second half of 2019.

The JMMC also endorsed the adjustments of the baselines of three countries, Brunei Darussalam, Ecuador and Malaysia.

The JMMC also welcomed Iraq, Kazakhstan, Nigeria and the UAE as new members of the Committee.

The JMMC also thanked the President of Azerbaijan, HE Ilham Aliyev, for his gracious hospitality and commended the stellar support that he has given to the “Declaration of Cooperation.” The Committee emphasized the unique role that the city of Baku has played in the history of the oil industry and expressed its gratitude to all involved from Azerbaijan, particularly HE Parviz Shahbazov, Minister of Energy, for the excellent arrangements for the meeting.

The JTC will continue its monthly meetings and the next meeting of the JMMC is scheduled to take place in May 2019, in Jeddah, the Kingdom of Saudi Arabia. 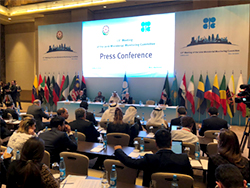 A press conference was held in Baku, Azerbaijan, following the 13th meeting of the JMMC 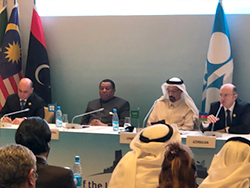 OPEC and non-OPEC officials at the press conference in Baku 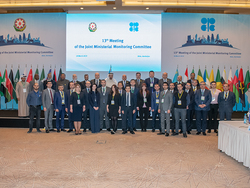 Group photo of the participants at the meeting 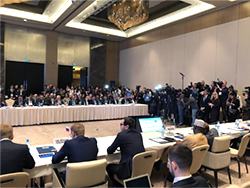 Media in attendance at the 13th meeting of the JMMC